UK interest rates ‘could return to 5% in long term’

rise in interest rates is good for savers, but can increase the cost of mortgage payments

Interest rates could rise to 5% in “the very long term”, a senior Bank of England figure has said.

Sir Charlie Bean, deputy governor for monetary policy, called it “reasonable” to think rates would return to pre-recession levels in 10 years or more.

Bank of England governor Mark Carney has said it could now rise, possibly to a “new normal” of 2.5% by 2017. 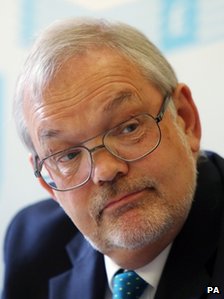 Sir Charlie Bean leaves the Bank of England on Monday

In an interview with Sky News, Sir Charlie, who will step down from his Bank of England role on Monday, was asked if the interest rate could return to 5% within 10 years.

“It might be reasonable to think that in that very long term you would go back to 5% but it’s probably quite a long way down the road.”

He also said that in the run-up to the financial crisis, economists were “not sufficiently cognisant of the risks building up”.

But he said the economy was now far more resilient than when he arrived at the central bank in 2000.

On Friday Mr Carney said that any interest rate rises in the coming years would be done in a “gradual and limited fashion”.

He said UK household debt levels had altered the financial system, and increasing interest rates would have more impact on household spending than in the past.

In a keynote speech earlier this month, Mr Carney hinted that the Bank may raise interest rates later this year. Markets had previously expected the move to come in the first half of next year.

The governor also reiterated his belief that the timing of the first rise was less important than the speed at which subsequent increases were made.

He told the BBC on Friday that when the time came, rates would rise more slowly than they have the past. Rates would rise in “a gradual and limited fashion”, he said.

The Bank is trying to give businesses and homeowners a better insight into interest rate movements to help them plan better for the future. This policy of forward guidance was introduced by Mr Carney when he joined the Bank last year.

Schedule a call with one of our consultants

Commercial Leases: What Are Your Options?

Update: The UK Government has extended the commercial eviction ban until 25th March 2022. The government is also introducing...

If you have signed a Personal Guarantee… Often directors are required to provide a personal guarantee as security for...

Much was made of HMRC again getting their preferred status in terms of their debts in Insolvencies. The Finance...

Your first consultation with us is completely free and you are under no obligation to proceed with us. However, it involves a thorough financial review and a tactical assessment of your various alternatives. We are assured you will leave the meeting with a clear understanding of your options and possible outcomes.

Bell & Company is not allied to any financial institutions, agencies or outside bodies. This is one of our greatest strengths. It means that, unlike others, we are able to provide impartial advice that is in each client’s best interest and to operate scrupulously on their behalf, free of outside interference.

In our latest webinar, we take a look at the financial impact of the Coronavirus pandemic on Businesses. We will be exploring new legislation, ramifications of the pandemic and what business owners need to look out for as we move into 2022.

This is a must-watch for any business owners or directors!

Catch up on Demand NOW